Why is this election different from all other elections?

Politics is in Chaos.  Our nation state (remember the UK?) is crumbling before our eyes and local government is out sourced, under funded, and as a consequence, has very little power or confidence.  But what will replace them?  One radical solution might be a city state as in the first European democracies of Athens, in ancient Greece.  The Mayor of London, including outer London, represents almost 10 million people.  London is part of a network of mega cities.  S/He's probably one of the most powerful directly elected people in the world in terms of her or his mandate and her or his voice.  Whether that's as part of Mayors for Peace, or the Mayors that will get together at this year's climate change conference.

The London Green Party is London's 3rd party - if you're counting from the last London elections in 2016.  We also came 3rd in all parts of my borough, Barnet, which is the largest in population and land mass.  Every vote here for City Hall Greens in the Assembly, counts, to elect people like your Green Assembly members Berry and Caroline Russell. 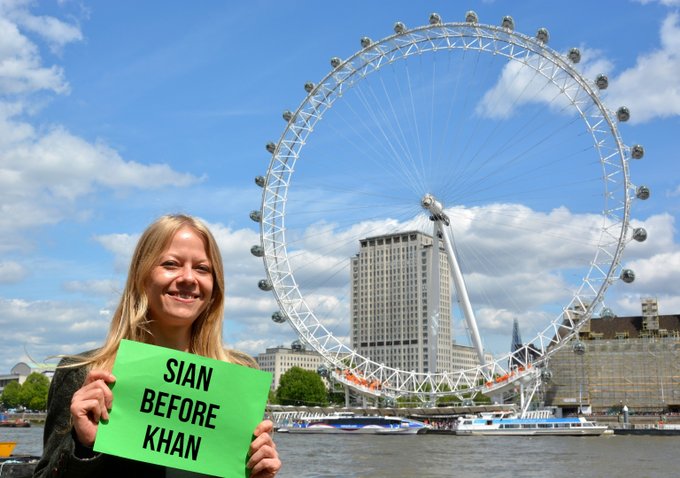 Sian knows that we in London Green Party are backing her, and only her, but following that debate, when we decided not to vote Sian then Khan as 2nd preference; this thing happened with the 2nd preferences.  We discovered that many people voted for the Labour mayor as their 1st and Sian as their 2nd preference.  Sian is obviously the best and this means many people don't understand why this election is different from normal elections.  It uses a voting system called the supplementary vote.  It was designed by Ken Livingtone in the Greater London Authority Act , so that there will always be Green Party in City Hall, holding the Mayor to account.  We've done so with initially 4 seats on the Assembly and now 2.

So how does this supplementary vote work? Here is how it works.

By voting #SianBeforeKhan you can support the party and candidate that you like the most (@SianBerry)
and still have a backup choice for the final round. 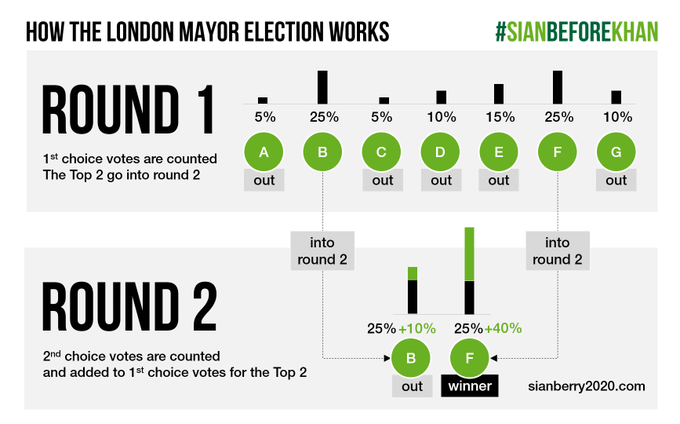 And if thousands vote #Sian Before Khan, Sian has a real chance of winning!